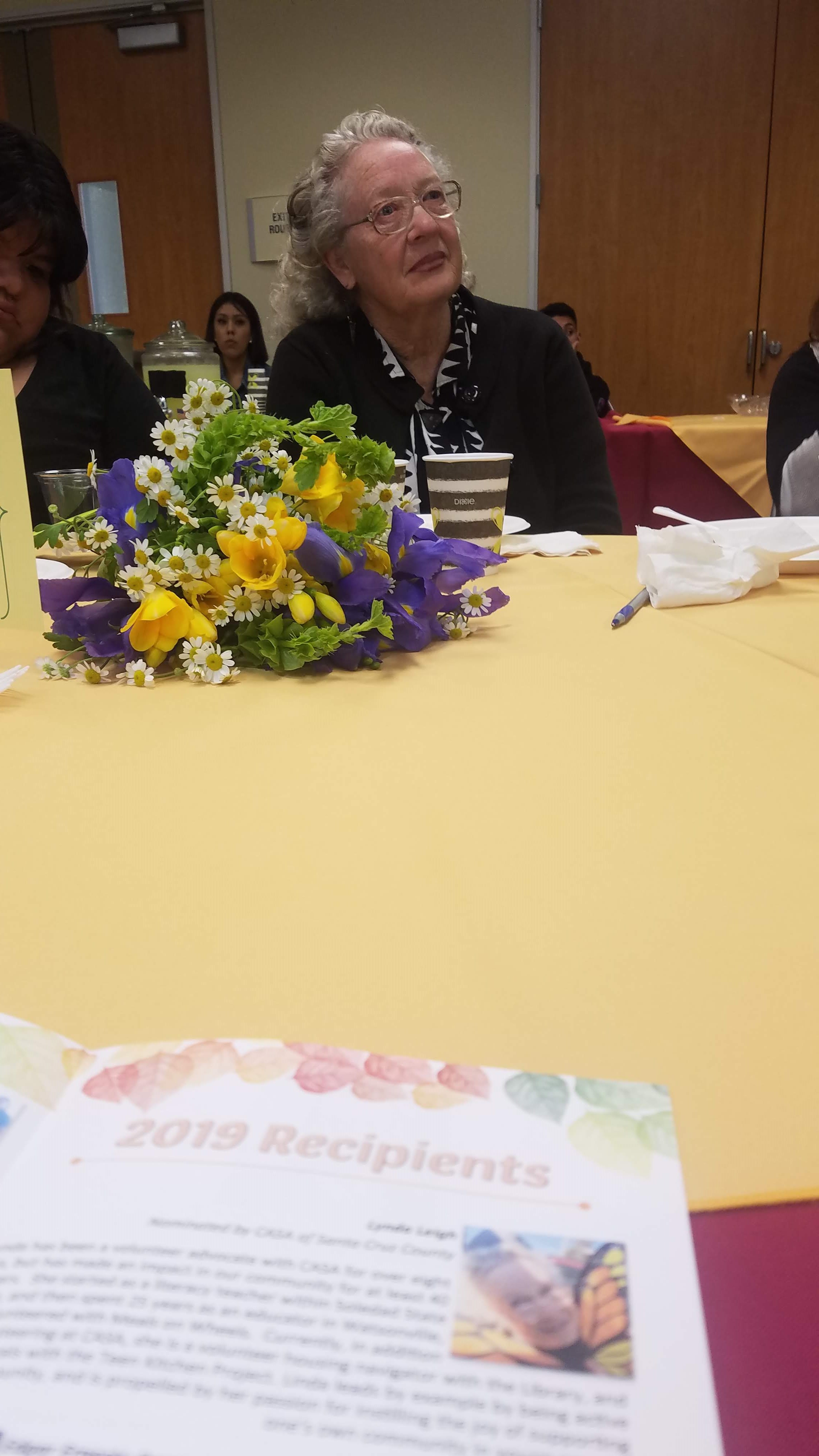 CASA of Santa Cruz County is proud to announce that Lynda Leigh, a long-time CASA volunteer Advocate has won the Cesar E. Chavez Award in the Adult Role Model category. The awards ceremony was held on March 28, 6:00 PM in the City of Watsonville Community Room..

Lynda Leigh has been a volunteer Advocate with CASA of Santa Cruz County for over eight years, working over that time with six different children that live in Watsonville and were part of the foster care system through no fault of their own; five of those children she still sees regularly and is sometimes lovingly referred to as the “book lady.”

Lynda started her teaching career as a literacy teacher within the Soledad State Prison.  She was appalled that so many of the inmates were illiterate.  As a literate person who could regularly see her loved ones in person and connect with the world through the written word, she couldn’t fathom that these students could not write letters to anyone “on the outside” or receive anything potentially uplifting and comforting either.  Through this work, she came to decide that what she really needed to be doing was working with teens at-risk of incarceration, fostering in them a love of reading and writing, all in the hopes of keeping them out of the prison system.  She went on to spend 25 years as an Alternative Education Teacher in Santa Cruz County, most of those years spent in Watsonville classrooms, and later as the Assistant Director overseeing all Watsonville-based County Office of Education alternative schools.

She has also been an active volunteer with the Meals on Wheels program and decided to start taking her students and CASA youth with her to deliver meals. Through that experience, she has fostered leadership and a service-mind set in these youth. Lynda is currently a Volunteer Housing Navigator with the Downtown Public Library working with our county’s homeless population, a “delivery angel” who delivers nutritious meals to persons with life-threatening illnesses in Watsonville for the Teen Kitchen Project, AND is still a Court Appointed Special Advocate.  And, of course, Lynda continues to take her former and current CASA children on delivery runs with her whenever she can.

Lynda believes and literally lives by the mantra that anyone and everyone has something to give back, and should give back; she not only leads by example as a longtime, very active volunteer in her community, but she is propelled by her passion for instilling the joy of supporting one’s own community in young people.  The East San Jose native, raised by an immigrant mother, has seen first-hand the impact these qualities have on both members of the community in need and on the youth in the community trying to find their place in the world.