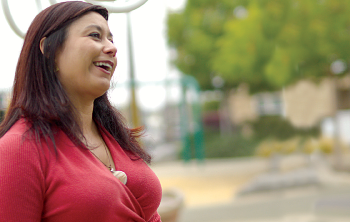 Brenda is one of those people who finds caring for others very natural and easy. As the eldest sibling in a large family, she was used to looking out for her younger siblings and cousins. When we asked her why she chose to volunteer with CASA, she said, “When you know what the need is, why wouldn’t you help?” She has been an Advocate for three children and feels so much gratitude for the time she has spent with each child. She says there is something truly special about being “the one person who is solely for that child while they are in the system.” One of the children she worked with was a young boy, Mario, living in a home with many foster children. Brenda could relate to being one of many, so she was particularly happy to be able to make him feel special and let him know that she “chose” to spend time with him and just him. She was also incredibly helpful because Mario’s foster family was Spanish speaking and Brenda is fluent in Spanish. Therefore, she was able to speak with his foster mom in her own language, which she felt helped her build trust. The family had been quite used to working with translators, but this direct communication helped build a deeper relationship and enabled them to work together as a team to meet Mario’s needs. Brenda tries her best to be the “voice” for each child she works with and she has learned to do that by listening and gently encouraging them to share their feelings. She is patient and kind and willing to be present and just be with them. Her first CASA child recently came back into the dependency court system for the second time. When we asked her if she would take the case again, she was quick to respond, “I’m her CASA - of course I will.” Brenda says the best part about being a CASA is that she gets to spend time with “a really cool kid.” From a child’s perspective, the best thing about Brenda being a CASA is that they have someone who understands them and who they can count on for the long term. Brenda, we are so glad our children can count on you!