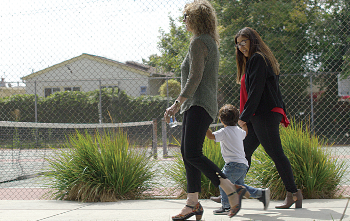 Conny grew up in Watsonville with five siblings. It was not an easy start to life, as she witnessed a lot of violence and gang activity. She says, “No child should have to go through what I went through.” She was four years old when she was placed in foster care and then moved around a lot – there was rarely a sense of stability or safety. It was incredibly hard to trust anyone, and she wasn’t so sure of Wendy, her CASA, when she met her at age 13. She says that when they met, she assumed that Wendy was just another person paid to supervise her or watch her “case,” who would do their job, and leave. She didn’t realize that Wendy was a volunteer. It took about a year for Conny to let down her guard and begin to see Wendy as a friend, mentor, and base of support in her life. When you see them together now, it’s difficult to imagine these two ever not being close. Wendy was there for Conny when she was pregnant, helping her through birthing classes and preparing for her son to be born. Wendy encouraged Conny to finish high school once he was born, even though it meant a bus ride from Watsonville to Santa Cruz and child care for her son. It was definitely a challenge, but she was committed and in fact graduated early. Conny says that Wendy has been there for all of the major milestones since they met and now she calls Wendy “my person.” Conny is taking classes at Cabrillo Community College and figuring out the next steps for her and her little boy. She is very grateful to Wendy and CASA for being in her life and helping her get on a different path. Wendy says she is incredibly proud of the woman Conny has become.